So remember how after my showcase in New York I got

Well that was cool.  I was all like, “That’s cool Dani, you are just supposed to be in LA! Things are going to go great for you there!” Well after the LA showcase I got…. DRUMROLL PLEASE…… 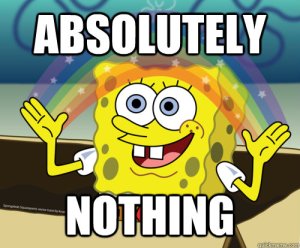 So let me just say first of all before you start being all like, “Dani it’s cool, take comfort blah blah blah, Showcase doesn’t matter, blah blah blah, it’s just one day, all hope is not lost” I KNOW. I have reached a point now of peace and acceptance and understanding and all that jazz BUT it’s been a process and here at Two Evil Actors we are interested in process. The inspiration behind Two Evil Actors is to help ourselves and others deal with #actorproblems, so I’m going to walk you through this process.

Step one: Question everything about yourself and feel your fragile little ego get bitchslapped into nothingness. 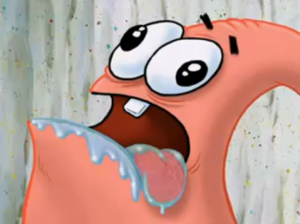 Step two: Panic about your future

So you acquired $80,000 in debt to get an acting degree and you have no way in the door to all those fancy shmancy high-paying acting jobs, huh?  How many crap jobs are you going to have to work to pay that back?  So you think you can just leech off of society and get an arts degree and just skip off into the sunset, huh? I guess you’ll just never be a success! Better get used to your service jobs! Better just pack all those dreams up in a box and set that box on fire you crazy monster!

Allie Brosh should sue us for how often we use her art. IT’S BECAUSE WE’RE OBSESSED WITH YOU, ALLIE. FORGIVE US.

This may seem extreme, but let me walk you through what happened to me the day after I performed my final showcase.

I woke up and drove to Van Nuys to do what I thought would be a routine clean of a house. (I am, among other things, a maid, remember?) I arrived to find 6 pounds of raw chicken on the kitchen counter, candle wax everywhere, all of the spoons in the house missing, and the garage sink broken from what appeared to be cooking meth.  And that was just the beginning.  I touched a used douche that day.

Let me repeat that.

I TOUCHED A USED DOUCHE.  And no, I am not talking about your boyfriend. (Bazing!) We eventually cleaned up this nightmare tweaker den and I jetted off to do a five hour waitressing shift. By the end of the day, at midnight, my dogs were barkin’.

Not my actual dogs. My feet were barking. I mean hurting.

What did I miss at school that day?  Two classes during which my beautiful classmates listed out all of the amazing meetings and offers they got from people who saw them at showcase.  We are talking big name agents and managers here people.  And some sketchy ones.

Sorry, agents and managers of LA, I’m too busy TOUCHING A USED DOUCHE for your meetings anyway. Don’t nobody got time for that.

Step three: Come to your senses

I had a moment on the plane back from New York when I was feeling real sorry for myself but then I realized… Am I going to let the first rejection out of the gate completely derail me and make me question my entire life’s journey?  I was born to do this.  I’m good at it.  I’m going to be fine. This is one meaningless rubric in a series of meaningless rubrics in the meat market that is Hollywood.  There is no reason to invest my sense of self worth in a dumb industry showcase. 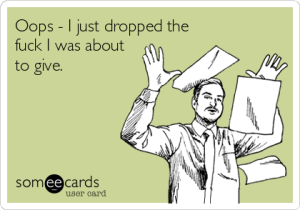 Oh yeah!  When I moved to LA I was all like, IDGAF, Hollywood!  You don’t scare me because you mean nothing to me!!

Okay so truly, in my heart of hearts, all I care about is doing and creating meaningful work.  Yes it would be nice to make money at what I do, and yes, there are plenty of people in the ole “biz” with whom I’d be honored and humbled to work.  But at the end of the day, most of the LA game is a bunch of bullshit about which I give almost no fucks.

Hey man, my ego just got bitchslapped and I am only human so OF COURSE I am going to engage in this useless thought exercise.  You know the one.

I mean, if I could just understand why no one liked me I could like fix it because I’m clearly not good enough as it is.**

**I know I know I sound pathetic. Just bear with me it gets better. PROCESS, PEOPLE.

Maybe it’s because I’m not fat but I’m also not super skinny.

No no maybe it’s because I’m not super tall. Or super short.

Maybe I should dye my hair brown so I seem more like, mature or something.

No, maybe I should go blonder. Who am I kidding, I’m not mature.

Maybe I should have sung more.

I should have told more jokes.

Maybe it’s because I was putting out the wrong vibe or didn’t use The Secret or something.

Can they smell my desperation? Am I desperate? What is wrong with me?  I NEED MORE SECRET.

Maybe I need both.  I am just real short on secrets.

Alright, calm down you insecure maniac.  Once you realize you don’t need fixing and “they” don’t “not like” you and that you are still talented and awesome and there’s nothing you can do about what people may or may not think of you, and that you’re just being a big insecure baby, there’s not much left but to stare blankly into the infinite abyss, and feel like a very small thing looking at a very tall thing.

Step seven: Rejuvenate your joy and go back to living your life exactly how you want to live it

Aaaaaaaand I’m over it.  My life is filled with love and joy and friendship and possibility.  I’m so fucking lucky to be exactly where I am right now and I am so fucking proud of what I’ve accomplished.  I just completed my Master’s degree.  I received the priceless gift of mentorship from the artists I admire most in this world. I got to know 9 other people I would never have even met, and form a family with them. I got to create and work and explore myself and do a ton of badass shit every day for three years. And now, I get the thing I wanted most of all.

I don’t have to do a god damn thing that’s not on my terms, and I get to now truly commence living.  All I gots left to do is go to COMMENCE-ment.

KNOCK ON WOOD this won’t be me

I get to make time to make art with Britt Harris and Elmira Rahim and Charlotte Gulezian and Michael Bernardi and Phil Orazio and all the other people with whom I’ve been putting off projects for years.  “We’ll do it when I’m done with school” is not a sentence I have to say anymore. Now I can say things like, “Let’s do that immediately” and “Do you wanna get happy hour?” and “Get that cat outta the kitchen!”

…I mean. I did say that recently.  I’m sure it’s germane somehow.

I’ve gotten off track.  What were we talking about?  Oh yeah.

I’m ready to take on the world y’all. I feel good. And deeply deeply thankful for everything in my life. And like, wildly happy in spite of a buncha craziness.  Let the games begin. Dani… ACTIVATE.